What is Legg-Calve-Perthes disease?

For the majority of children with Perthes disease, only one hip is ever affected. In 10 to 12 percent of children with the condition, both hips are affected though usually not at the same time. 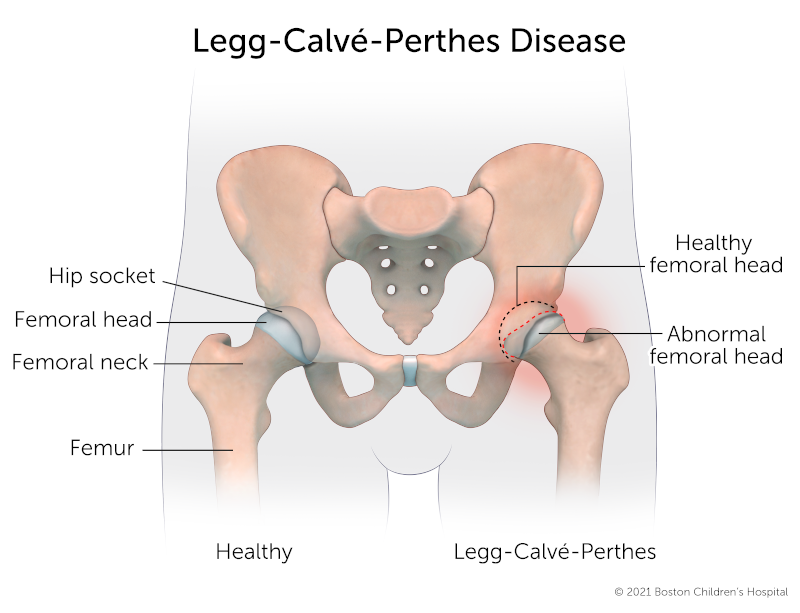 What are the symptoms of Legg-Calve-Perthes disease?

Signs and symptoms of Perthes disease can include:

Perthes disease is idiopathic, which means that there is no known cause for this condition. What is clear is that when blood supply to the femoral head is disrupted, the bone starts to break down.

About one out of every 12,000 children develop Perthes disease. Boys are five times more likely to be affected than girls, but when girls are affected, the condition tends to be more severe.

Perthes disease most often affects children who are between 4 and 10 years old, very physically active, and small for their age. The condition tends to be more common in children who have been exposed to second-hand smoke.

What are the stages of Legg-Calve-Perthes disease?

The blood supply to the femoral head is disrupted, causing the hip joint to become inflamed, stiff, and painful. Areas of the bone turn into dead tissue (avascular necrosis). In x-rays, the femoral head appears less round. This phase can last from several months up to one year. 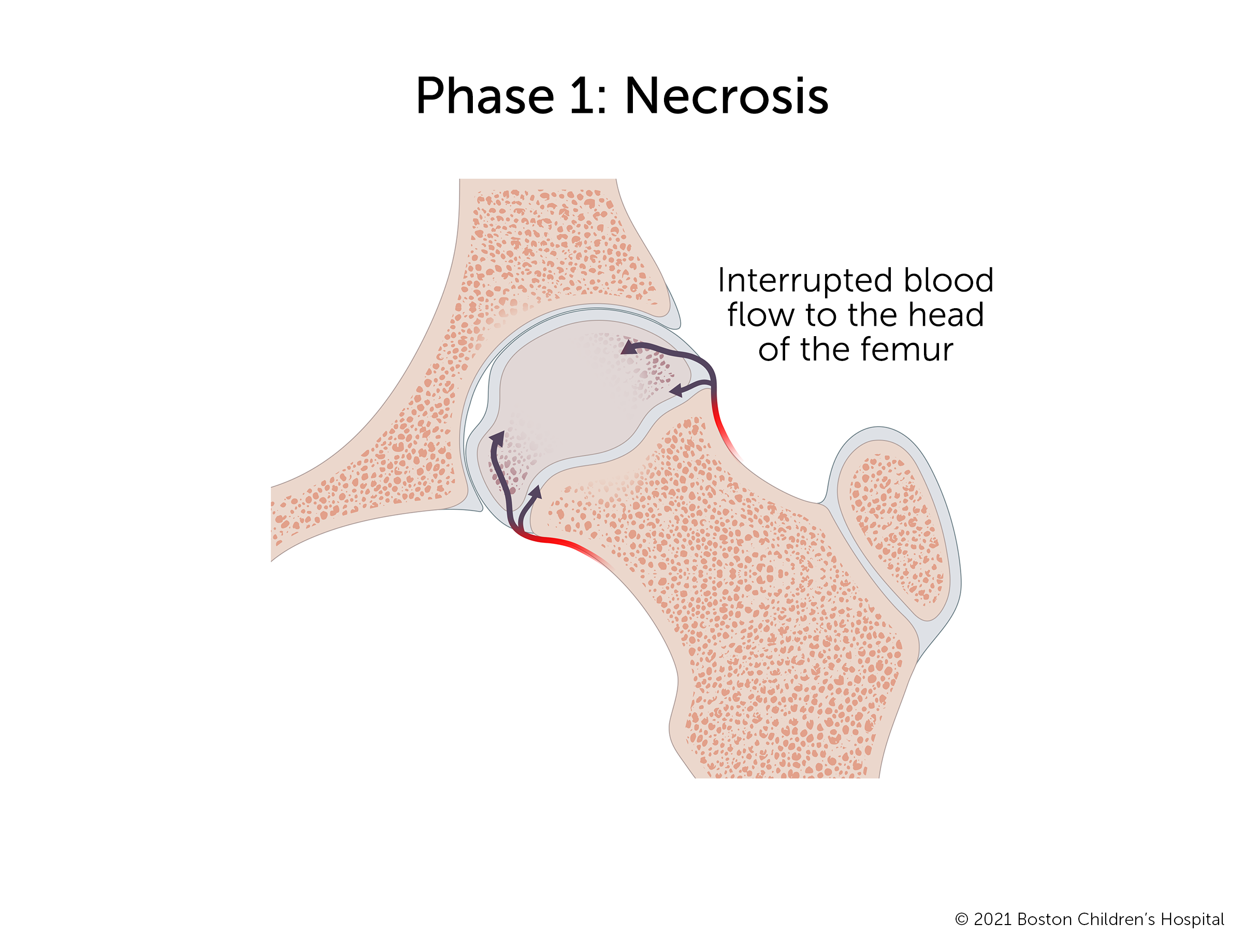 The body “cleans up” the dead bone cells and replaces them with new, healthy bone cells. The femoral head begins to remodel into a round shape again, but the joint is still inflamed and painful. This phase can last up to two years. 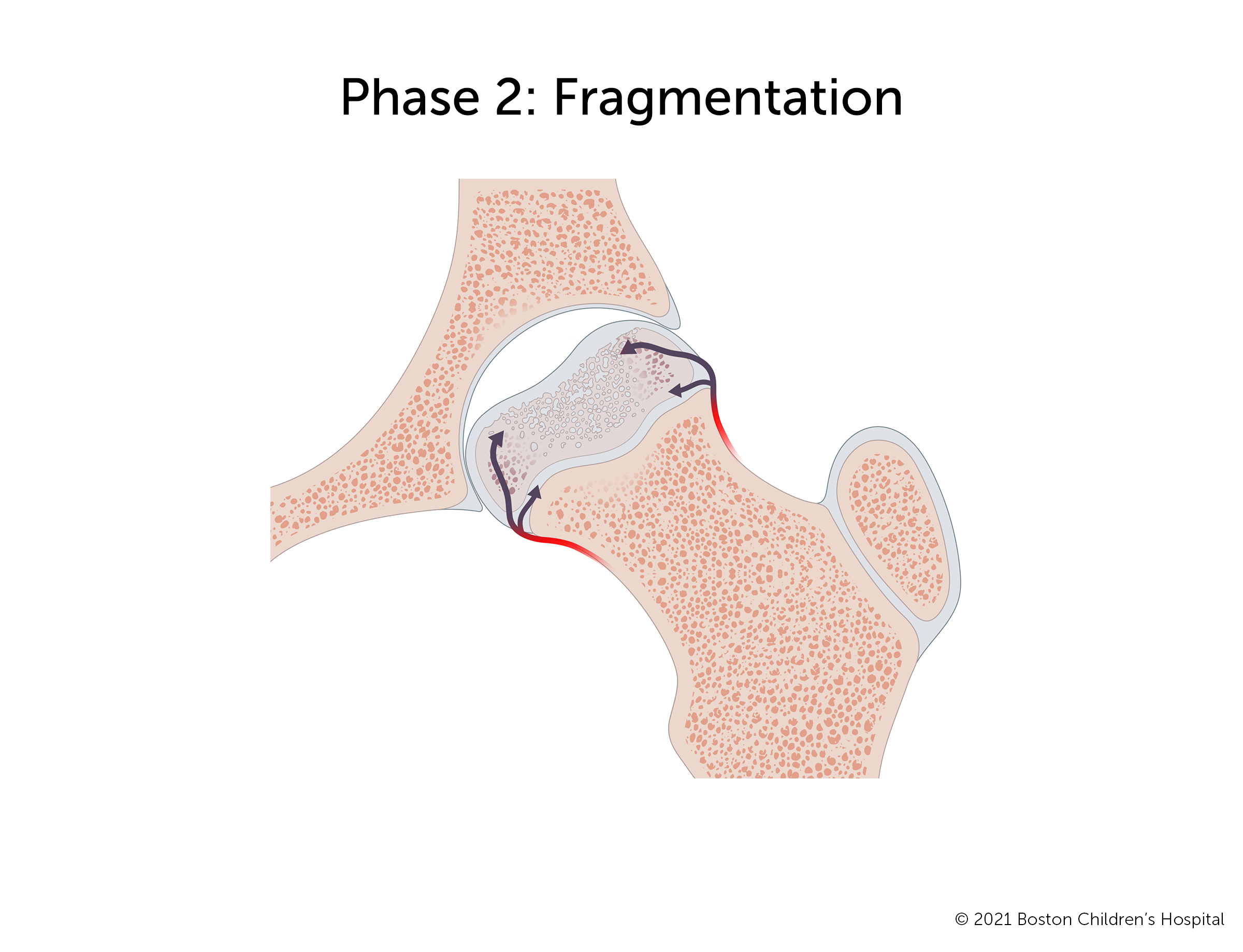 The femoral head continues to remodel itself back into a round shape with new bone once blood flow is restored. This phase can last from one to three years. 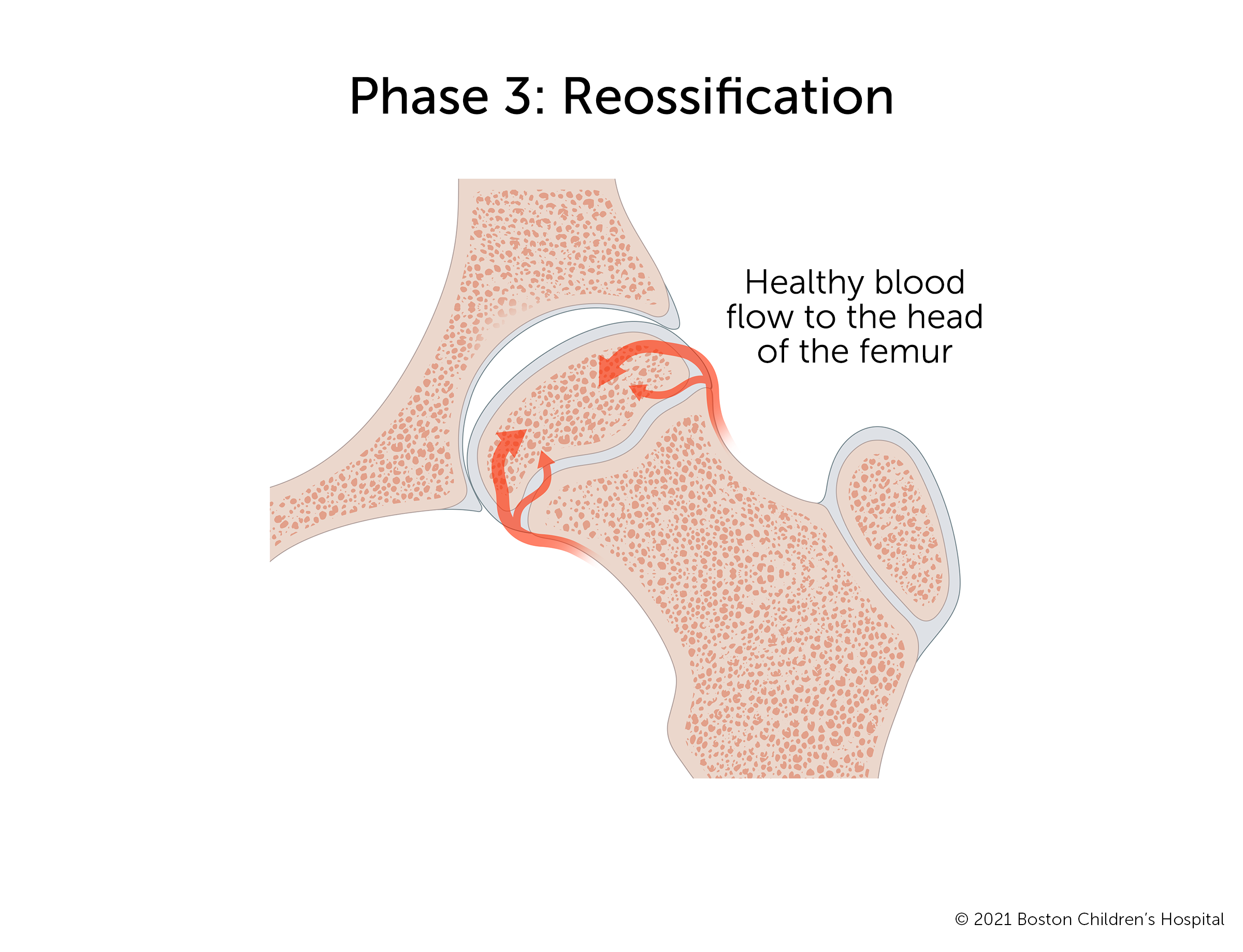 Normal bone cells replace the new bone cells, and the femoral head becomes more of a mushroom shape than a ball. This phase can last a few years as the bone heals. 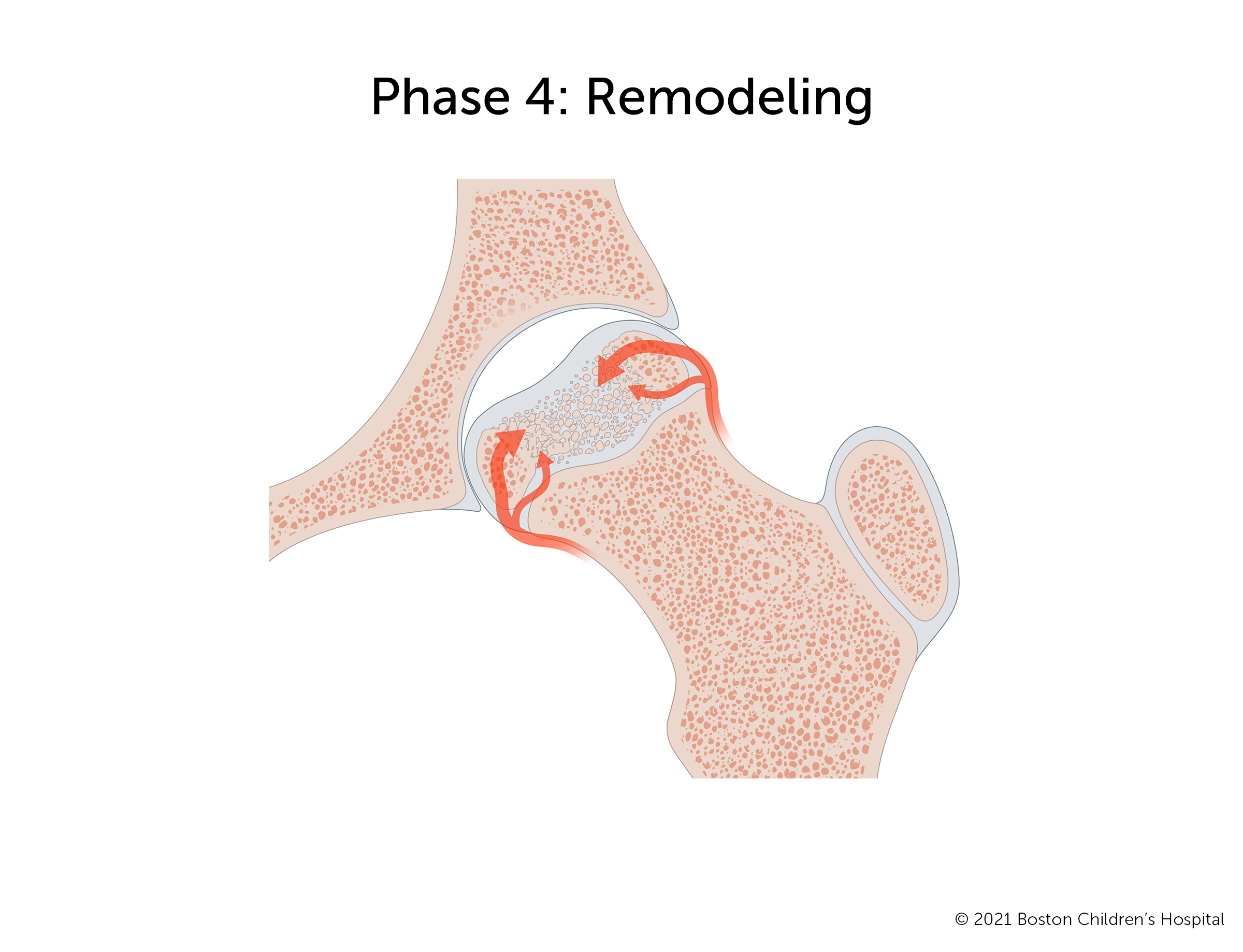 How is Legg-Calve-Perthes disease diagnosed?

Children’s bones heal quickly and have a good capacity for self-repair. Therefore, early diagnosis and treatment of Legg-Calve-Perthes disease allow as much time as possible for the head of your child's thighbone to remodel itself back into a round shape.

In addition to a complete medical history and physical examination, diagnostic procedures for Perthes disease may include: 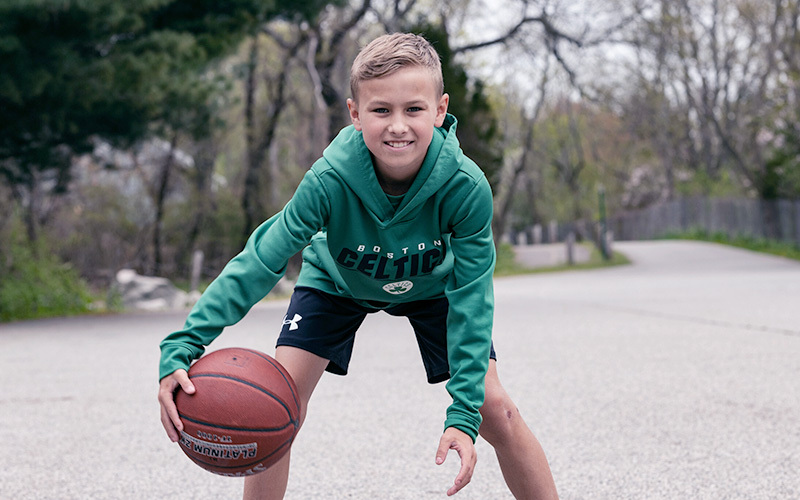 Some kids with Perthes disease can be treated with physical therapy, but Drew needed surgery. It would be two years before he could fully return to sports. Dr. Benjamin Shore did everything he could to help Drew feel like a normal 10-year-old, including clearing him to shoot baskets in the driveway as soon as it was safe.

How is Legg-Calve-Perthes disease treated?

Your child’s treatment will depend on their age, range of motion in their hip, and extent of the condition. Your child’s orthopedic specialist will recommend a treatment based on the degree of your child's hip pain, stiffness, and how much of the head of the thighbone has collapsed.

Non-surgical approaches to treatment may include:

If non-surgical treatments prove inadequate, your child may need surgery to hold the head of the thighbone in the hip socket. 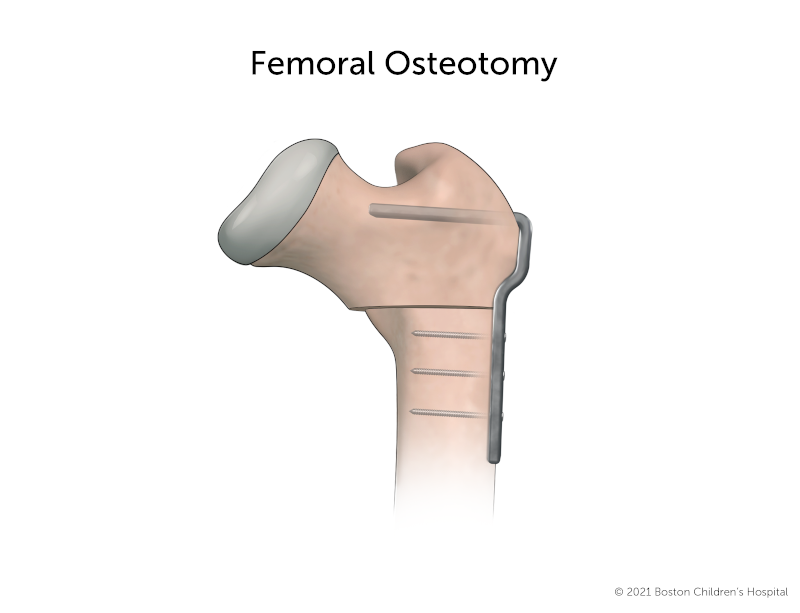 What is the long-term outlook for children with Legg-Calve-Perthes disease?

The two most important factors that determine your child’s outcome are their age at the onset of treatment (usually, the younger the better) and how much of their femoral head is affected.

Diagnosing and treating your child’s Perthes disease early in its development greatly increases the likelihood of a successful outcome. The majority of children treated for Perthes disease have corrections that enable them to walk, play, grow, and live active lives.

Even after successful treatment in childhood, some children develop hip problems later in life. For this reason, many people with Perthes disease continue to receive follow-up care and monitoring from their pediatric hip specialist into adulthood.

How we care for Legg-Calve-Perthes disease

Specialists in Boston Children’s Child and Young Adult Hip Preservation Program have deep experience diagnosing and treating children with Legg-Calve-Perthes disease. In fact, Boston Children’s orthopedic surgeon Arthur Thornton Legg, MD, was the one of the first to recognize and describe Legg-Calve-Perthes disease in 1910. Our specialists have continued to lead the way in pioneering advanced techniques for treating this condition.

Our expansive team of pediatric orthopedic hip specialists provide world-class care throughout each patient’s journey, collaborating over both common and complex hip disorders to provide our patients comprehensive care. Our goal is the same as yours: to help your child get better so they can return to being healthy and pain-free.