Scoliosis is a condition in which the spine has an abnormal curve. Healthy spines have a natural front-to-back curve. A spine with scoliosis curves front to back but also curves sideways. Some spines curve to the left or the right in a “C” shape, while others curve in both directions, forming an “S” shape. 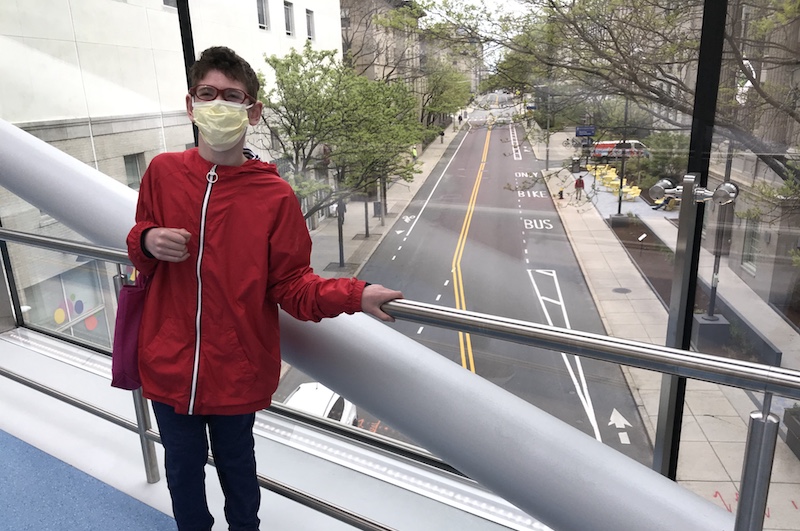 Having outgrown his most recent scoliosis brace, Jared and his family were all set for his spinal fusion surgery until COVID-19 put everything on hold.

Scoliosis ranges from mild to severe, based on the degree of the curve. Treatment depends on whether the curve is stable or growing and whether it is mild, moderate, or severe.

The degree of the curve may increase over time, especially during growth spurts. If detected early, many children with scoliosis can be treated without surgery, but only if treatment begins before their curve becomes severe.

Do kids and teens have different types of scoliosis?

There are several different types of scoliosis. Some are present at birth, while others develop during childhood or adolescent growth spurts:

What are the symptoms of scoliosis in kids and teens?

Most of the time, scoliosis does not cause back pain or other health problems. 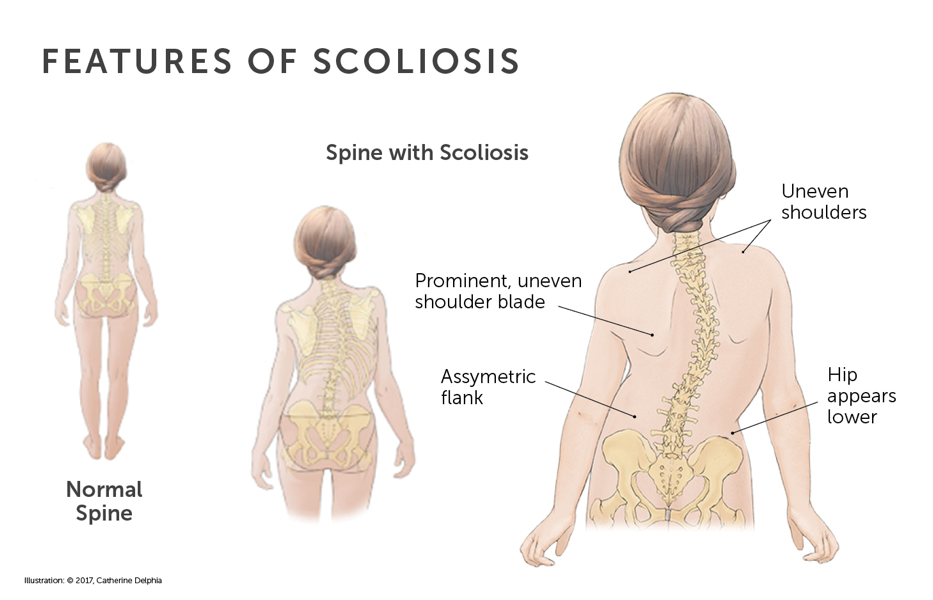 What causes scoliosis in kids and teens?

Idiopathic scoliosis has no known cause but tends to run in families.

Congenital scoliosis develops at an early stage of pregnancy when some of the vertebrae in the spine don’t form completely or don’t separate correctly. In some cases, it’s caused by a combination of both of these problems.

Neuromuscular scoliosis is a common side effect of conditions such as cerebral palsy, spina bifida, or muscular dystrophy. Children with these conditions often have underdeveloped muscles. Because of this, their spines can develop side-to-side curvatures, especially during growth spurts. Syndromes that affect muscular development around the spine, such as Marfan syndrome and Down syndrome, can lead to syndromic scoliosis in a similar manner.

Other causes of scoliosis in kids and teens

Scoliosis is not caused by poor posture or carrying a heavy backpack.

How is scoliosis diagnosed?

Scoliosis can be difficult to diagnose. Some spinal curves are visible and obvious, but in other cases, they are not. Curvature of the spine usually progresses slowly and does not cause back pain.

Scoliosis is often overlooked until early puberty when adolescents start growing rapidly. Because early diagnosis is an important part of successful treatment, pediatricians, family physicians, and some school programs regularly check children and pre-teens for signs of scoliosis.

The Adams Forward Bend Test is a common method used to diagnose scoliosis. The patient puts their hands together and bends forward with straight knees, which makes their spine visible through their skin. The clinician looks for unevenness in the hips, ribs, or shoulders. If they see a curve, they may use a scoliometer, a flat piece of metal about the size of an index card, to measure the degree of the curve. A curve of more than five to seven degrees on the scoliometer may indicate scoliosis. 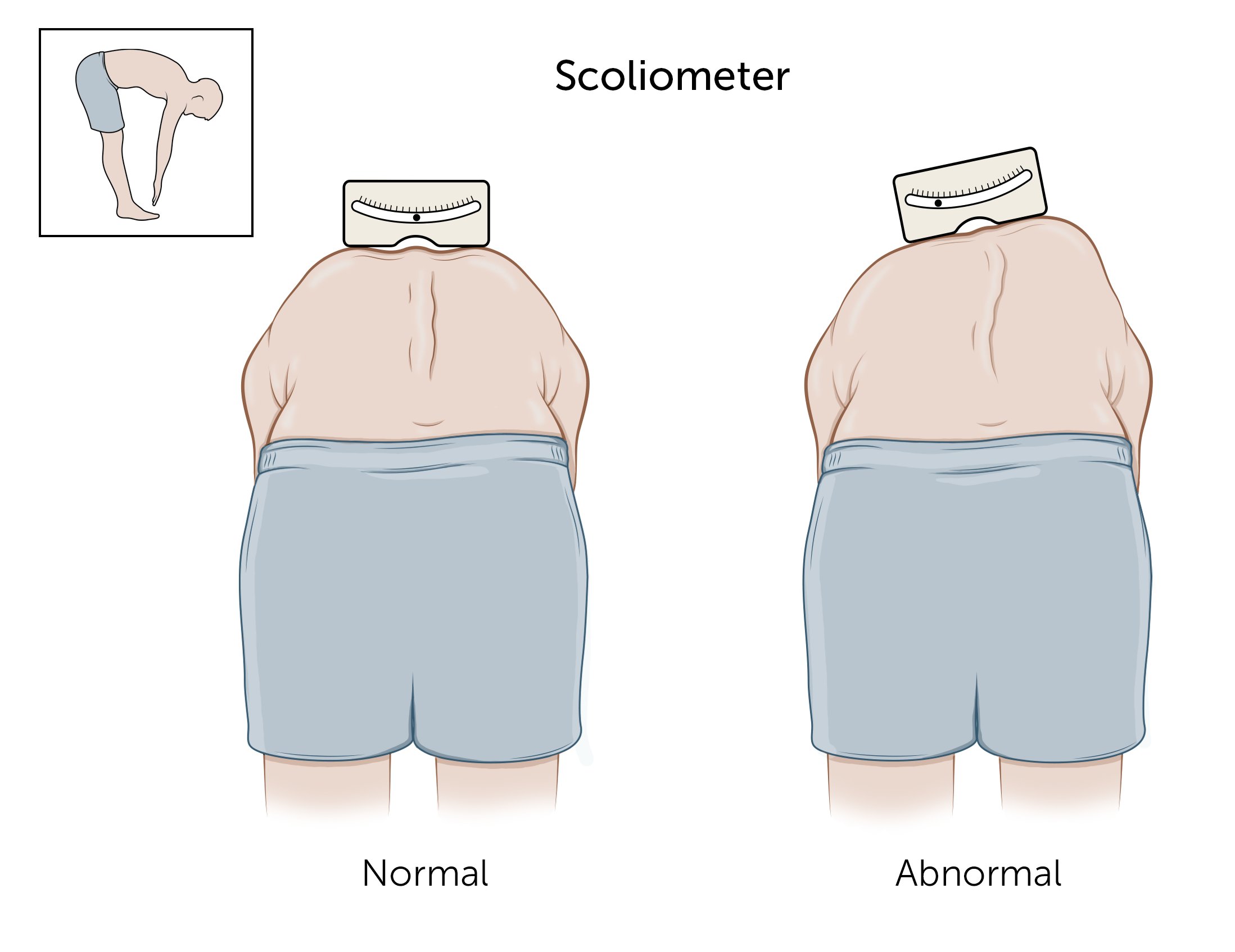 Determining the degree of curvature

If your child has scoliosis, their doctor will gather further information about their spine by asking questions about any family history of scoliosis, doing a physical examination, and looking at an x-ray of your child’s spine. This will help the doctor determine: 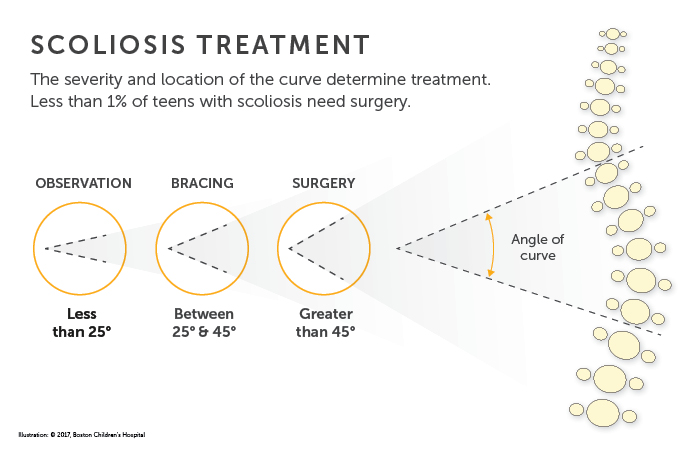 How is adolescent scoliosis treated?

Treatment for scoliosis in tweens and teens depends on the type of scoliosis, stage of development, and severity of the curve. In most cases, scoliosis can be treated without surgery. Your child’s doctor will determine a treatment plan and follow-up based on what they learn from the x-rays and physical exam.

Children with a mild curve, less than 25 degrees, are typically monitored at regular doctor visits to be sure the curve does not get worse. In young children, mild curves of the spine have the potential to become worse as the child grows and develops. In older teens who have reached their mature height, mild curves may not be a problem.

Schroth therapy combines breathing exercises and physical movement. It is sometimes combined with other forms of physical therapy for patients with scoliosis.

If your growing child’s curve is between 25 and 45 degrees, or if it is getting worse, their physician may recommend bracing. A scoliosis brace will be specifically designed for your child and their particular curve. The brace holds your child’s spine in a straighter position while they’re growing to partly correct the curve or prevent it from increasing.

In certain situations, doctors recommend a cast. A cast serves a similar purpose as a brace; it prevents an abnormal spinal curve from becoming worse as the child grows. Casts are typically changed every two to three months, depending on the child’s age.

Despite everyone's best efforts, some curves do not respond to bracing or are too severe to treat with bracing. In such cases, these patients will need surgery. When possible, surgeons delay surgery until after a child’s growth spurt.

Spinal fusion surgery is the most common surgical treatment for severe scoliosis in adolescents. Using metal rods, hooks, screws, and wires (known as instrumentation), the procedure straightens the spine and solidifies the bone to prevent further abnormal curving. For six to 12 months after surgery, the spine fuses in much the same way that a broken bone heals. The child may need to wear a brace during this time. The instrumentation typically remains in the back without causing any problems.

A preview of surgery day

Patients scheduled for spinal fusion surgery and their families spend an immersive afternoon in a simulated surgical area as they prepare themselves for surgery. 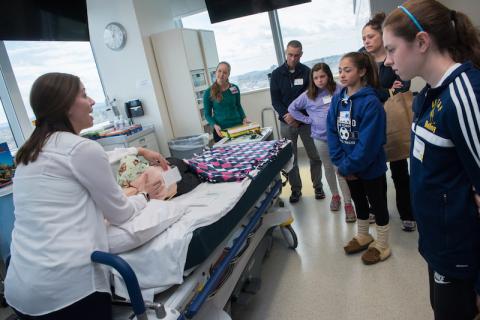 Treatment for toddlers with scoliosis

Scoliosis treatment is different for very young children whose spines are at an earlier state of growth. Options for early-onset scoliosis include:

Diagnosed with scoliosis before her first birthday, Jeanne was treated with bracing and became taller and more nimble as her spine grew straighter. 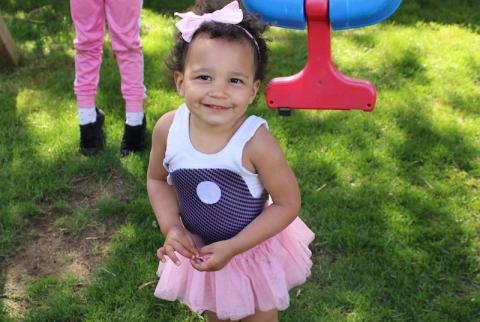 How we care for scoliosis in kids and teens

The Spine Division at Boston Children’s Hospital is the largest and busiest pediatric spine center in the United States. Our spine specialists see thousands of spine patients and perform hundreds of spine surgeries each year. We treat all types of scoliosis and other spinal conditions, from the most common to the most complex.

With early intervention, the majority of our patients are treated successfully with bracing and other non-invasive treatments such as physical therapy and Schroth therapy. The most widely used brace for scoliosis, the Boston Brace, was developed at Boston Children’s more than 40 years ago. Today, we continue to work tirelessly to further improve non-surgical treatments for scoliosis and other spine disorders.

For children who need surgery, our surgical team includes surgeons, anesthesiologists, and nurses with specific skills and expertise in spinal fusion surgery. Each member of the team plays a role in ensuring quality and safety before, during, and after surgery.

What is the long-term outlook for children with scoliosis?

Most children and teens diagnosed with scoliosis can look forward to normal, active lives. Your child’s outlook depends in large part on the nature and severity of their scoliosis. Age also plays an important role. Early diagnosis and treatment can improve the outlook for many children with scoliosis.

Patient and family guide to scoliosis

This e-book for patients and families shares information about the diagnosis and management of scoliosis, and offers advice about how to live with the condition.

Patients and providers offer advice to help others with scoliosis thrive while wearing a brace.

How to support your child who has to wear a brace

Experts at Boston Children’s answer questions about what it’s like to wear a brace and how a parent can support their child when they have to wear one.

The Pediatric Sports Medicine Division provides comprehensive care to athletes of all ages and abilities, from professional athletes to eager novices.

The Spine and Sports Program focuses on spine conditions and injuries that affect young athletes, with the goal of getting them back in action.

The Spine Division provides comprehensive care for scoliosis and other spinal conditions.

The Pectus and Chest Wall Treatment Program evaluates and treats children with differences in the shape of their chest.